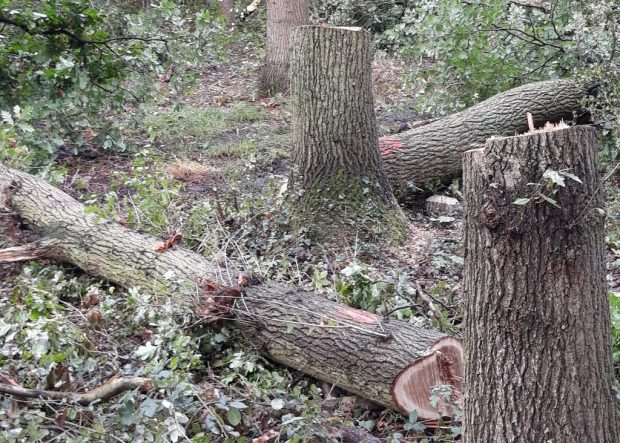 The Government’s Environment Bill, introduced into Parliament earlier this month, is a major piece of legislation to tackle the environmental and climate crisis we are facing. While they won’t grab the headlines, there are some really important reforms in the Bill which will help the Forestry Commission combat the scourge of illegal felling, and help protect our precious street trees. These measures will make a real difference to our environment if they are enacted, so I want to highlight them in this blog and encourage everyone to get behind them.

First, let’s understand why change is needed. It is already an offence to fell trees without a felling licence where one would have been required, and anyone involved (the owner, agent and timber merchant or contractor) can be prosecuted. Our guide ‘Tree Felling – getting permission’ explains when a felling licence is needed and how to apply for one, and there is now an online application service Felling Licence Online to make applying easier.

But times change, and illegal felling is on the increase. When these laws were made, the value of the timber was the main driver for illegal felling, whereas now the most common motive is to try to take advantage of the development value of the land. The fines the courts can impose are based on the value of the timber, and are now far too small in proportion to the potential gains from development. We need to increase them. There is also a greater incentive for unscrupulous people to look for loopholes in the law. We need to close them.

The Environment Bill will put this right. Fines for illegal felling will be unlimited, giving the courts discretion to punish offenders appropriately and set a real deterrent. The Forestry Commission will be given new powers to make Restocking and Enforcement Notices more effective and less easy to dodge. For example, a Restocking Notice would become a charge on the land where the felling had taken place, so it would appear on the local land charge register – visible to any prospective buyer and binding on them if they bought the land. And the courts would be given the power to order land owners to replant trees on land where the Forestry Commission’s replanting directions following an illegal felling had been ignored – on pain of a further fine and/or a custodial sentence.

These measures in the Environment Bill would amend the Forestry Act 1967, and were the subject of a public consultation in December 2018. Enacting them and bringing them into force will put an end to the frustration for the Forestry Commission and for the public of seeing a long process of investigation and prosecution culminating in some offenders either evading the consequences of their actions entirely or walking away with a derisory penalty.

Separately, but also very relevant to the protection of our trees, the Bill also introduces a duty to consult before felling street trees. This fulfils a government manifesto commitment, and will give the public an opportunity to be consulted before a street tree is felled. Open consultation will be led by the local highway authority managing the road, and will serve to increase transparency and understanding of decisions around these important green assets. While it will of course still be necessary to fell street trees in some circumstances, this measure and the extra scrutiny it brings should help to improve good practice in decision making. Our report on the recent issues in Sheffield highlights the sort of good practice we would like to see followed more closely in future.

Trees and woodlands are so important to our lives, and the Forestry Commission will continue to protect, promote and extend the sustainable and legal management of woodlands across England – using these new measures to improve our enforcement efforts. Please support their enactment.