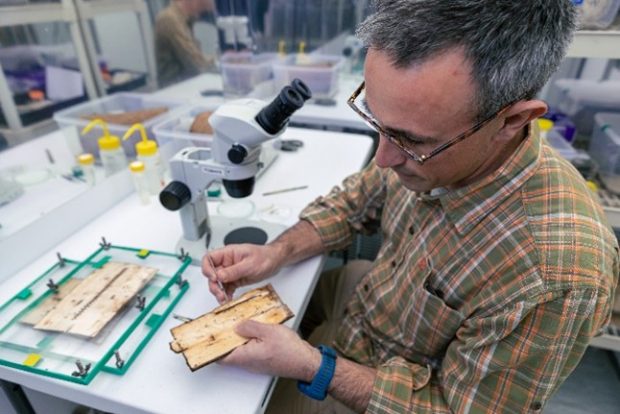 In the UK, the value that our plants and trees provide to society each year is estimated at £9bn. In reality, plants are priceless. They clean our air, provide 80% of the food we eat and are known to help improve our mental health and wellbeing. However, the threat to plants from pests and diseases is real and increasing. The Animal and Plant Health Agency and the Forestry Commission have an important part to play in keeping them healthy, but with your help we have a much better chance making sure plants are protected for the future.

By familiarising yourself with the signs and symptoms, you can help prevent the introduction and spread of damaging pests and diseases. We take a look at the top pests and diseases threatening our plants and woodlands.

Phytophthora ramorum is a microscopic fungus-like organism which causes severe damage to trees. Over 150 plant species are affected, including some forest species. Larch trees, which are widely grown in the UK for the timber market, are particularly susceptible. The disease has also been found on European sweet chestnut trees at several locations in southern and central England. Suspected cases of ramorum disease on trees or other woodland plants must be reported to the Forestry Commission. If you think you have spotted Phytophthora ramorum symptoms, check them online before reporting through TreeAlert.

The larger eight-toothed European spruce bark beetle is a destructive pest of spruce trees, particularly Norway Spruce, as well as some conifer species. The beetles are present in most of continental Europe. Only one outbreak has ever been discovered in the UK, in a woodland in Kent following routine surveillance by the Forestry Commission. It is currently subject to statutory eradication action and the beetle is not known to be present in other areas.

Although the beetle is mainly a secondary pest preferring dead, stressed or weakened trees, under the right conditions it can attack healthy trees. If left uncontrolled, the beetle could cause significant damage to the UK’s spruce-based forestry and timber industries. Landowners in the south East should actively manage their woodlands to reduce the risk. If you think you have spotted this pest, report suspected findings through TreeAlert.

Oak processionary moth is an insect pest of oak trees. In large numbers, caterpillars can defoliate oak trees leaving them vulnerable to harsh environmental conditions. Their caterpillars and nests contain tiny irritating hairs which can cause health issues in humans and animals. Since 2012, a control programme has been in place to limit the size and spread of the outbreak in the South East. The rest of the country is designated a Protected Zone, which means it is free from the pest. If you think you have spotted oak processionary moths (especially in the Protected Zone) contact the Forestry Commission.

One of the most dangerous plant bacteria worldwide, Xylella fastidiosa (currently in Italy, France and Spain) causes a variety of diseases, with huge economic impact for agriculture, public gardens and the environment. In Italy it is estimated that impact of Xylella on olive trees alone has amounted to a loss of €390m in the past three years. Xylella is spread by feeding insects, such as the meadow spittlebug, a very common species in the UK and Europe. Disease symptoms include wilts, diebacks, stunt and leaf scorches. Leaf scorch symptoms can be non-specific and confused with many other diseases and pests. For more on Xylella, visit the Plant Health Portal.

If introduced, emerald ash borer could devastate ash populations in the UK. The beetle is native to Asia but has since spread westward, as far as Ukraine. As the name suggests, the insects are a metallic emerald green between 7.5 and 13.5mm long. To prevent accidental introduction, special measures are in place prohibiting the import of ash trees in all countries where emerald ash borer is present. For more information on EAB, visit the Forest Research website. If you think you have spotted emerald ash borer or its symptoms, contact the Forestry Commission.

Species affected: Prunus and some other trees
UK status: Absent
Symptoms: Large tunnels in wood, circular exit holes, distinctive adult beetles (but not all specimens have the red marking)

The red-necked longhorn Beetle is a wood boring non-native beetle that is one of the most destructive pests of Prunus fruit trees (cherry, plum, apricot and peach). Ornamental Prunus species can also be attacked. Native to south-eastern Asia it was first found in Europe in 2008, with outbreaks in Italy and Germany, though the German outbreak is under eradication. The outbreak near Naples is of particular concern because the outbreak area is quite large (over 20 km wide) and getting larger as the pest continues to spread.

Importers and growers of Prunus should be aware and take care when sourcing plant material from Europe. Importers of products packaged in wood should also be aware as the beetle larvae can be transported with wood.

Epitrix potato flea beetles pose a serious threat to potato production in the UK. Potato tubers or soil attached to the tubers could carry the pest (as pupae, adults or possibly larvae) over long distances. The import of potatoes from infested areas in Portugal and Spain provides a potential pathway of introduction to the UK. If they were accidentally introduced to the UK they are likely to spread relatively quickly as the adult beetles can fly. Unless detected very early, eradication would be almost impossible because the pests can feed on a wide range of hosts. Once established, control measures would be difficult and costly. The symptoms most likely to be seen are feeding damage left by larvae on the surface of the potato, this appears as tunnelling.

The Colorado beetle is a serious pest of potato and is not established in the UK. This is why it is a notifiable quarantine pest, whose introduction and release is prohibited under plant health legislation. Colorado beetles are occasionally imported into the UK as “hitchhikers” on non-host plant material, such as leafy vegetables, salad leaves, fresh herbs and grain, which have been grown in fields previously planted with potato, but they can also be imported with potatoes. Such accidental introductions most commonly occur in spring and early summer.

The adult beetles overwinter in the soil and emerge in the following spring, to feed and mate. The larvae and adults feed on several cultivated and wild members of the potato family (Solanaceae), such as nightshade, tomato, aubergine and pepper.

Rose rosette disease (RRD) is a damaging and often fatal condition affecting rose species, caused when the host plant is infected with rose rosette virus (RRV). The disease is spread by a tiny species of mite nearly invisible to the naked eye. It was first observed in the 1940s in a limited number of states in Canada and the USA, but is now found throughout much of North America. In 2017, the virus was detected by surveys in two ornamental gardens in India (West Bengal). Rose rosette virus has never been recorded in the UK and is believed to be absent, but it has the potential to cause significant damage to the rose industry should it be introduced. Horticulturalists and gardeners are advised to remain vigilant for signs of the virus.

Species affected: many ornamental and crop plants
UK status: outbreaks in protected cultivation, under official control
Symptoms: nymphs and pupae usually on the underside of leaves, adult whitefly, excreted honeydew and sooty moulds growing on it

The tobacco whitefly has a huge host range, affecting over 800 plant species. It is found in many European countries, but is absent from the UK. It can cause direct feeding damage, with additional problems due to honeydew and associated sooty mould growth. It can also transmit a wide range of viruses, many of which are not present in the UK. The threat from these viruses is probably greatest to tomato and cucumber production, but some can affect ornamental crops. What makes it differentiates it from the common glasshouse whitefly is yellower pupae and the adults rest with their wings in a tented shape, while the ubiquitous glasshouse whitefly has whiter pupae and adults rest with their wings flatter, hiding the body.

If you think you have spotted any of the above pests or diseases please contact your local APHA Plant Health and Seeds Inspector, or PHSI Headquarters. You can find more information about plant health pests on the Plant Health Portal.