Barnaby Wylder is our Plant Health Forestry Lead in the North West of England.  In this blog he reflects upon ten years of handling ash dieback cases, and what the future might hold for our ash trees.

Sometime before the early 1990s, it is thought that a small number of live ash trees were exported from East Asia to Eastern Europe.  From that point, the fate of millions of the UK’s ash trees was sealed, as, unbeknown to anyone, an inconspicuous fungus also hitched a ride.

Harmless to the species of ash that occur in its native region, the fungus would overwinter in parts of a leafstalk (the rachis), encasing it in a special material to prevent decomposition.  The following year in late spring and throughout summer, when conditions were damp enough, the fungus would grow tiny white mushrooms a few millimetres across releasing countless spores into the still, early morning air.  Some of these spores would be lucky, landing on foliage of nearby ash trees, grow into the leaflet and then on into the rachis. The affected tree would shed the affected leaf and the cycle would repeat.

When this exotic fungus encountered the UK’s only native ash, Fraxinus excelsior, it found it very palatable.  Most occasions the same leaf infection cycle progressed, but unfortunately, in some instances, the fungus would also continue to grow into the stems of our native ash, either girdling the branch entirely, killing part of the tree, or in larger stems grow into conspicuous (frequently diamond-shaped) cankers.

Annual attacks began decimating ash in woodlands across ever-increasing areas of mainland Europe – particularly rapid deaths were noted on young and recently-coppiced trees. Repeated damage to larger susceptible trees weakened them at different rates, but if honey fungus (Armillaria species) was present it would also attack the trees from their roots, killing them more rapidly.

As blogs go, this has not been terribly uplifting so far!

It was Autumn a decade ago that I was among the Forestry Commission and Animal and Plant Health Agency (APHA) workers who discovered that the ash dieback fungus had infected ash trees in the wider countryside of the UK, following a spring and summer of intercepting, tracing back and destroying consignments of infected young ash trees which had been grown in and exported from countries on mainland Europe already suffering from the disease.

Around this time a decade ago, I and very many colleagues from Forestry Commission and other Defra Group organisations worked over an extraordinary weekend across the UK looking for signs of ash dieback, and the results were stark. Many sites of recently planted ash were found to contain infected trees, and further infected ash trees in the wider environment were found in many parts of South East England, but also locations in Lincolnshire, Yorkshire, Northumberland, South East and North Eastern Scotland.

A catalyst for change

The discovery of ash dieback in the UK, terrible as it was, became a catalyst for many aspects in today’s plant health world that are easy to take for granted.

Following the findings there was an upsurge of media attention and public concern that our native ash would have the same fate as millions of elms following the introduction of the fungus causing Dutch elm disease in the mid-1960s.  The government appointed an independent Tree Health and Biosecurity Task Force to rapidly produce a report with recommendations how to best protect the UK from plant pests and diseases.  The Task Force made several significant recommendations including:

Developing a UK Plant Health Risk Register:
Although we will never have a list of absolutely everything that may threaten trees in the UK we now have a dedicated open-access resource that has identified and helped raise awareness of many very serious tree pests and diseases we want to avoid establishing in the UK – and with this knowledge colleagues in Forestry Commission, APHA and trained volunteers from Observatree undertake more targeted inspections to ensure they are not in UK plant trade or countryside.

Appointing a Chief Plant Health Officer:
It seems strange to think that in 2012 there was a Chief Veterinary Officer acting as a commander in animal related emergencies, but with no equivalent for plant health. Since 2014 we have been fortunate to have Professor Nicola Spence leading plant health response in the UK and representing the UK on a world-wide forum promoting the cause of plant health and biosecurity.

Developing and implementing procedures for preparedness and contingency planning, predicting, monitoring and controlling the spread of plant pests and diseases:
A bit of a mouthful I’ll admit!  Back in 2012 the Forestry Commission England Plant Health Team was less than a tenth of its current size. Likewise, there are now many more plant health inspectors in APHA than a decade ago ready to respond to potential plant health outbreaks.

Our scientists are also prepared in the case there should be another incident on the scale of ash dieback: In 2012 the Forest Research Tree Health Diagnostic Advisory Service (THDAS) was a very small team due to resource constraints.  Following high levels of media attention in Autumn 2012, members of the public were greatly concerned with the unfolding ash dieback situation and an overwhelming number of well-meaning reports of possible symptoms arrived by email, phone and letter.

Today we have a much-expanded team of expert scientists in THDAS rapidly responding to tree health reports across the UK, and a brand-new quarantine facility within which to work.  Nowadays anyone from Tree Health inspectors to concerned members of the public can report suspicious tree health symptoms online using TreeAlert and the scientists receiving these reports can see precise location details and images of the reported symptoms.

What about our ash trees?

Since 2012 we have learned that ash dieback was already present in the UK many years before spores blew in on the wind from the near continent.  We are beginning to comprehend that, although many ash have died quickly, for many more of our millions of ash, the disease is going to be chronic.  We now understand that there is no precise timeline or pattern as to how an individual ash tree or woodland will cope: Age is an important factor; site conditions play a significant role, with severe decline often observed in woods with poor, thin soils (such as the South Downs, and limestone pavement in the Lake District and Yorkshire Dales), sites prone to waterlogging or regions with higher rainfall and (as mentioned earlier,) presence of honey fungus. Slower decline is often observed with lone trees in open countryside.  Tree owners must prepare for the eventuality that most of their ash will likely die or be severely damaged, but resources have been developed to assist them including guidance on management (LINK Managing ash dieback in England - GOV.UK (www.gov.uk)), case studies (LINK Sharing Forestry Knowledge: Managing Ash Dieback - Royal Forestry Society (rfs.org.uk)) plus advice and support that local FC Forest Services experts can provide to help build long-term resilience in woodland management.

The most positive news is within the genes of our ash – a small proportion of our trees show a high level of tolerance to the fungus and, as long as these are not removed during essential management of the badly-affected trees, we shall in future decades have healthy ash trees within our landscape.  The first phase of a national archive of tolerant ash was planted a few years ago. Scientists including many in Forest Research, RBG Kew  (Watch: How Kew is tackling ash dieback) and the Living Ash Project should not be left alone to search for these trees, so if you see a healthy-looking ash (as pictured below) amongst obviously poorly ones in spring or summer take a photo.  If it still appears healthy in another two-three years it might be you have discovered a tree essential to the future of the species in the UK, so don’t keep that knowledge to yourself - please report it to us. 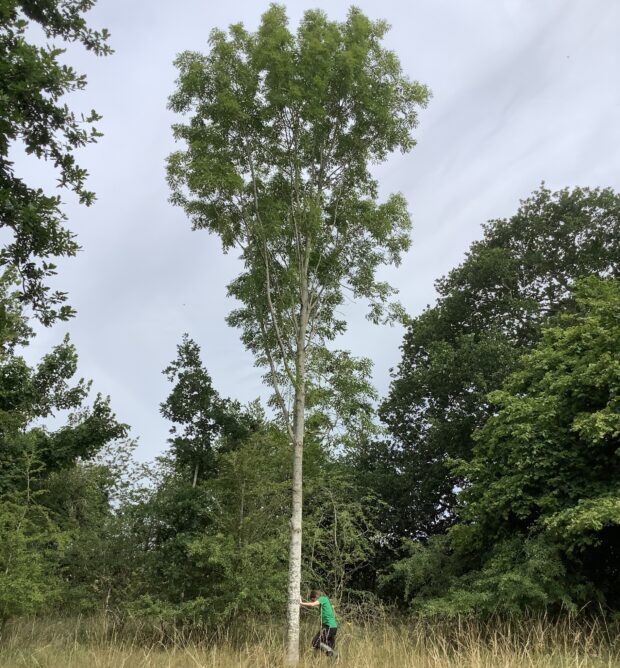